Victoria Centre through the decades Our History

Take a trip down memory lane.

It is difficult for many people to imagine Nottingham without Victoria Centre. When it opened in 1972, Edward Heath was Prime Minister, the Berlin Wall was still standing and David Bowie’s Ziggy Stardust had burst onto the pop scene.

Modern shopping malls had been springing up around the UK since the mid-1960s, with people discovering the thrill of being able to buy everything under one roof.

Victoria Centre was home to Boots’ flagship store after it moved from Clumber Street, where it had been since 1849, and Jessop & Son department store (‘Jessops’), now John Lewis & Partners, set up shop for us to purchase luxury goods.

Much has happened in the city over the past 50 years. In 1977, Castle Rock began brewing beer and the Queen and Prince Philip opened the Queen’s Medical Centre during the Silver Jubilee tour.

Nottingham Trent University opened in 1992, 1999 saw the launch of Nottingham Pride and the early 2000s brought the Nottingham tram network and the revamp of the Old Market Square, helping to connect our communities.

The Covid-19 lockdowns of 2020/21 meant that most shops, restaurants and entertainment venues in Nottingham, and across the country, temporarily closed.

The centre though, remained a focal point for many Nottingham residents, with essential retail outlets keeping their doors open so people could continue to access essential goods, medicine and services safely.

As restrictions were lifted, the centre once again became a hub for friends and family to meet; a place to re-discover their favourite retailers and explore brand new shops, enjoy catch-ups over coffee and ignite new relationships over the dinner table.

Nottingham Victoria Railway Station was demolished in 1967, making way for the shopping centre. The centre was a vision of modernity, the first enclosed retail space, heralding a new era of shopping for leisure, yet one of its most striking features - the clock tower - was retained from the former station.

Five years later, the shopping centre was complete and ready to welcome its first visitors. One of the most memorable moments from the early days was the sight of 800 staff members from Jessop & Son (now John Lewis & Partners) carrying stock as they made the short walk from their former premises on Parliament Street to their new home in Victoria Centre.

Almost everyone in the city knows the historic clock tower outside - but they also know and love the Aqua Horological Tintinnabulator, nicknamed the ‘Emett Clock’, which was installed shortly after the centre opened. Water-powered, it was designed by sculptor Rowland Emett, whose machines featured in the film, Chitty Chitty Bang Bang. 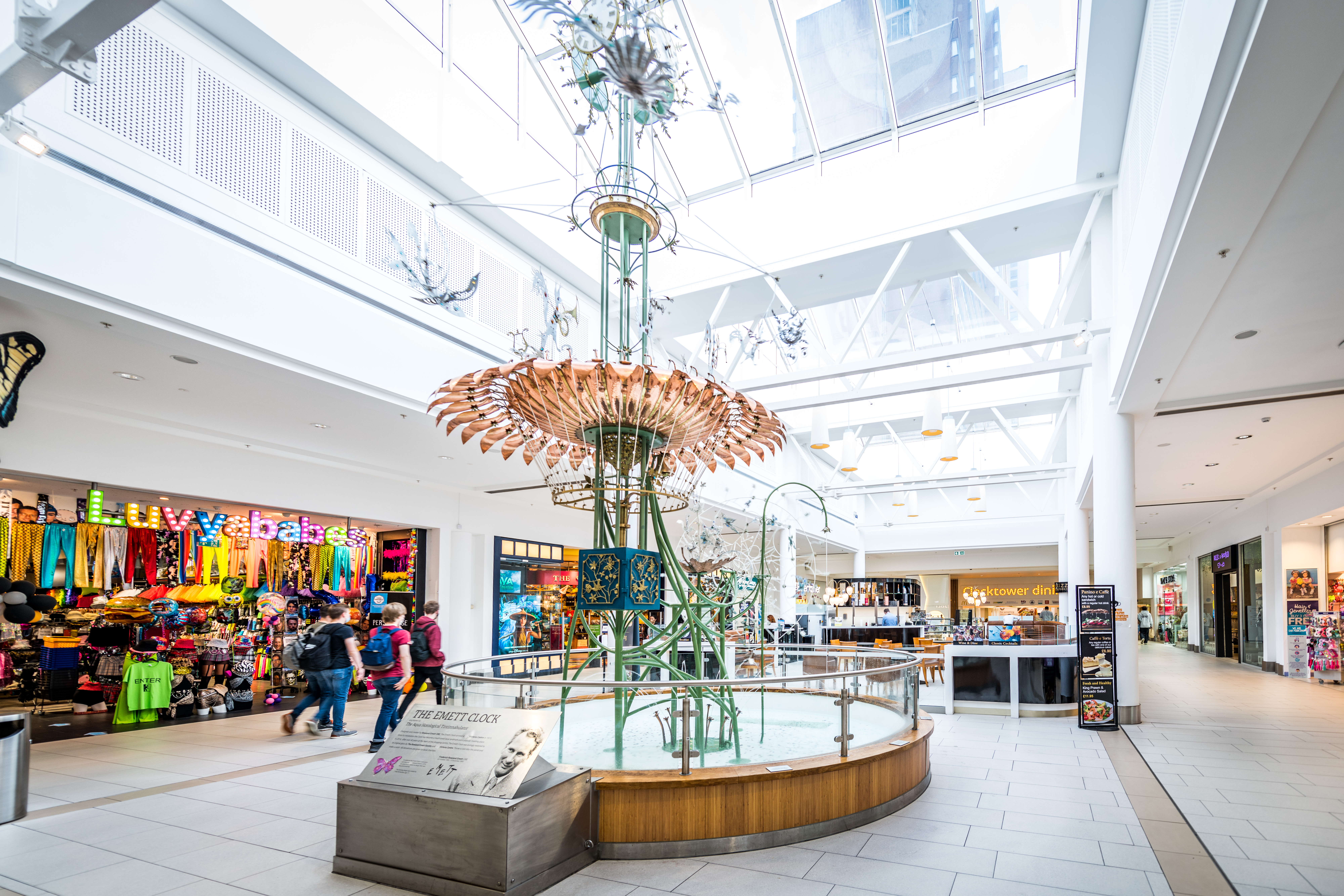 For children of the 1970s and ‘80s, no shopping trip was complete without a stop at ‘the snake’ climbing frame. Another popular attraction was ‘Jerry’s fish tank’, which was installed on the Upper Mall in the late ‘90s and loved by people of all ages.

Over the years, Victoria Centre has welcomed many famous faces for shop launches and signings - including Mel B, Pete Wicks, Peter Andre, Lad Baby and Theo Paphitis. YouTube sensation Tiana Wilson, of Toys and Me, also entertained young audiences when she visited in 2018. 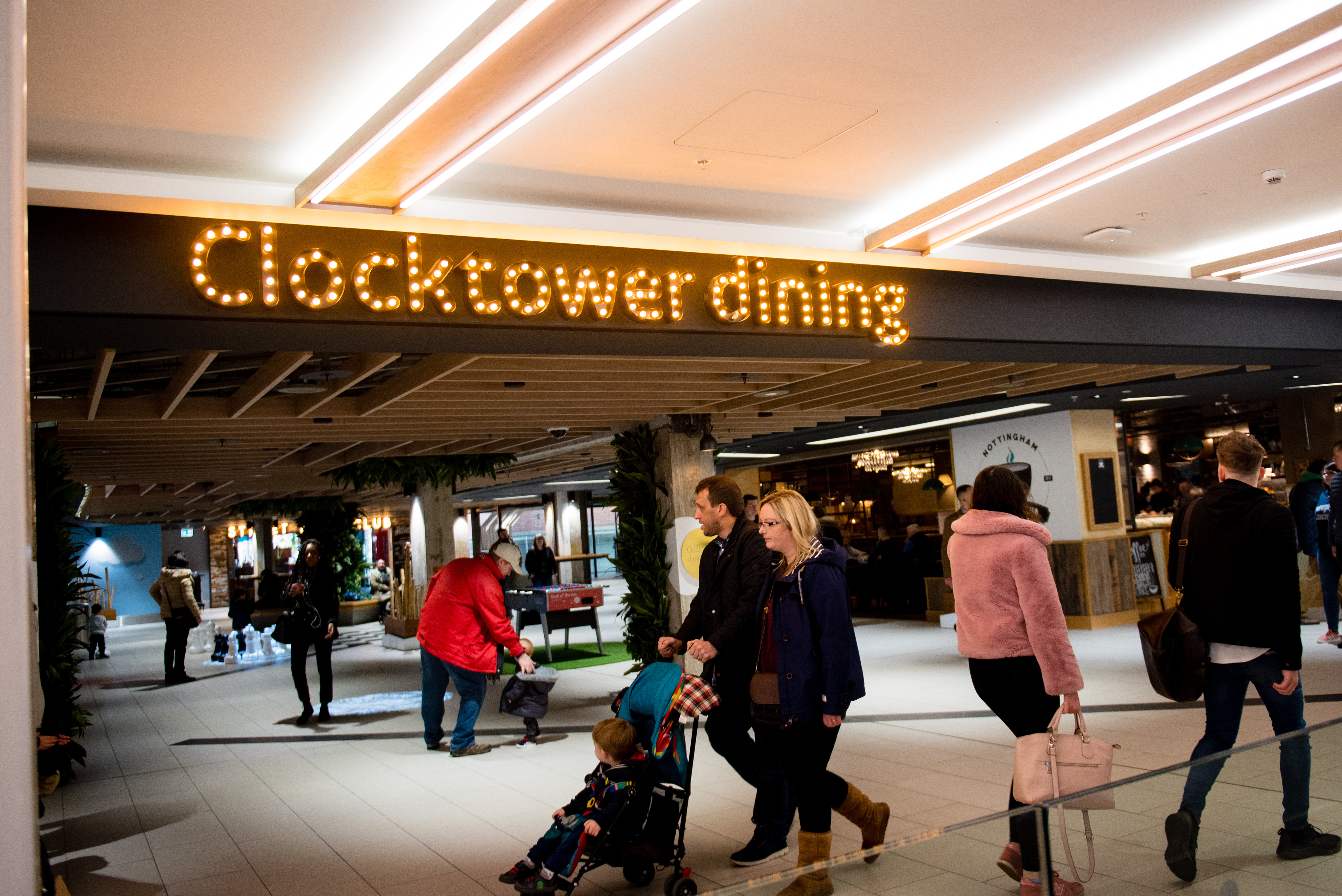 Nine years ago, plans were unveiled for a major refurbishment of Victoria Centre which was completed in 2015, creating a modern and spacious mall for everyone to enjoy, including the creation of our Clocktower dining area.

As well as shopping and dining, visitors can now enjoy even more events like the Ball Pit, Confetti Room, Sticker Room and Roller Room. For Christmas 2021, the centre even played host to the Glow Room featuring an interactive light display and our own Christmas fairytale, written by a local children’s author who put Nottingham and its feathered protagonist, ‘Robin’, at the heart of the story.

Our masterpieces are complete!

The return of The Glow Room

The must-loved Glow Room is set to make a return this Christmas, with new interactive elements to celebrate our 50th birthday.

Cosy find to keep you warm this autumn